skip to main | skip to sidebar

How To Make Whipped Soap 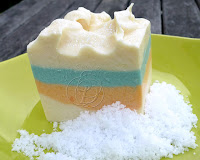 You are wondiering what whipped soap is? According to Emily at Soap Restless it is cold process soap but you are adding a twist similiar to whipping body butter. Normally when you make cold process soap the lye in some kind of liquid, melt the oil and buttes, mix them together at a certain temp which would be between 85 degree F to 110 degrees F.  Emily said that whipped soap is different in the sense that is make under a low temperature - below butter's melting point.

Sounds interesting?  Would you like to learn how to make whipped soap?  I know I would like to learn more about it. Then I would suggest checking out Emily's turtorial on How to Make Whipped Soap on her site Soap Restless.
Posted by Soap Crafter at 4:40 AM

Classes That I Teach

Where I Teach Classes

Where to Purchase Supplies Online

Soap Crafter
United States
I have a B.A. in Mass Communication and took my first melt and pour soapmaking class in 2002. Since then I got hooked making my own bath and products. I have taken various courses in Soapmaking (Melt & Pour, Cold Process, Hot Process), lotion making (lotions, creams, lotion sticks), bath products (bath salts, body scrubs), body products (lip balm, body butters, body balms, whipped butters) and more. Most of all of my classes were taught by Lori Nova of The Nova Studio in Point Richmond, Ca. I have taught courses since 2004 at various locations. I have worked as an Event Coordinator at Michaels Redwood City.